Dubai, 28 October 2019
Emirates NBD (DFM: EmiratesNBD), a leading bank in the region, delivered a strong set of results with net profit up 63% y-o-y to AED 12.5 billion. The results include a AED 4.4 billion impact from the Network International transaction. Post DenizBank acquisition, Core Operating Profit grew 5% y-o-y, supported by a 17% increase in net interest income on loan growth and a 31% increase in non-interest income from higher foreign exchange and credit card income. The Bank’s balance sheet remains strong with healthy liquidity and credit quality. A rights issue has been announced to further boost capital ratios.

Hesham Abdulla Al Qassim, Vice Chairman and Managing Director, Emirates NBD said: “Emirates NBD delivered a strong set of results in the first nine months of 2019. The Bank successfully completed the acquisition of DenizBank in the third quarter of 2019. This represents a significant milestone for Emirates NBD, expanding our presence to 13 countries and establishing Emirates NBD as a leading Bank in the MENAT region with over 14 million customers. The Bank also raised the foreign ownership limit from 5% to 20% and announced its intention to seek shareholder and regulatory approval to further increase this to 40%. The Bank is offering our valued and loyal shareholders an exceptional opportunity to partake in our continued growth and success through participating in a rights issue of up to USD 1.75 billion as we remain key partners to the growth agenda and vision of our nation’s esteemed leadership. We are delighted to be ranked among the top 20 in the Forbes’ list of the World’s Best Regarded Companies, securing a leading spot among global brands. This reflects our relentless effort to deliver unparalleled customer service and best-in-class products, whilst being a champion of corporate social responsibility and sustainability.”

Commenting on the Group’s performance, Shayne Nelson, Group Chief Executive Officer said: “Net profit advanced by 63% to AED 12.5 billion for the first nine months of 2019. This includes a AED 4.4 billion impact from the Network International transaction. The successful completion of the rights issue will ensure that the Bank’s capital base provides a strong foundation to embrace controlled growth in the coming years. We have delivered further digital innovation with the creation of E20., a digital business bank for SMEs and entrepreneurs. We are honoured to be recognised for our pioneering efforts in employee volunteering and corporate social responsibility by IMPACT2030, the corporate volunteering arm of the United Nations.”

Surya Subramanian, Group Chief Financial Officer said: “The operating performance for the first nine months of 2019 was pleasing as Core Operating profit advanced 5% supported by asset growth and higher fee income. With the inclusion of DenizBank, total income grew 20% in the first nine months, helped by 17% growth in net interest income and a 31% improvement in non-interest income. NIMs improved 1 bp    y-o-y to 2.82%, helped by higher margins from DenizBank. The cost to income ratio at 30.3% is within guidance however the Bank remains firmly focused on cost controls as we face pressure on income due to falling interest rates.” 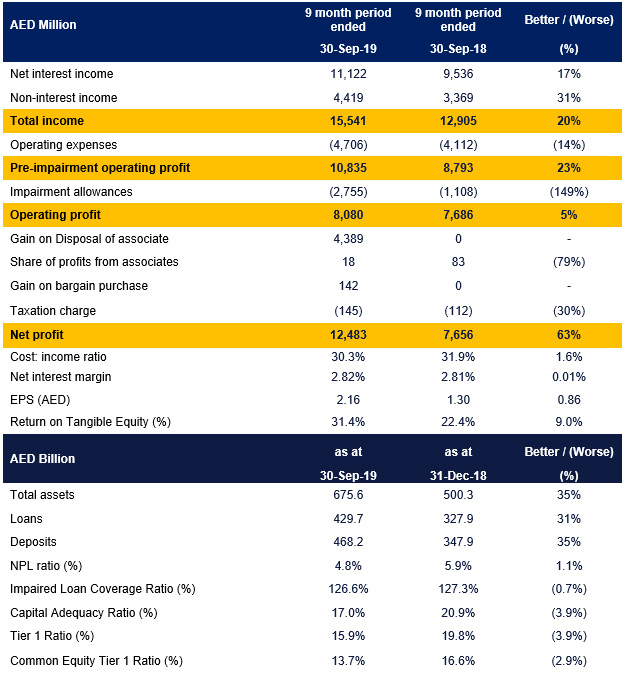 Total income for the first nine months of 2019 amounted to AED 15,541 million; an increase of 20% compared with AED 12,905 million during the same period in 2018. Net-interest income improved 17% y-o-y, or 8% excluding DenizBank supported by loan growth.

Costs for the first nine months of 2019 amounted to AED 4,706 million, an increase of 14% over the previous year due to a rise in staff and operating costs relating to international expansion. The cost to income ratio at 30.3% is within guidance however the Bank remains firmly focused on cost controls as we face pressure on income due to falling interest rates.

During the first nine months of 2019 the Impaired Loan Ratio improved by 1.1% to 4.8% as DenizBank’s loans were recorded at fair value on the date of acquisition resulting in no addition to Group NPLs. The impairment charge during this period of AED 2,755 million is 149% higher than 2018 with cost of risk increasing to an annualized 103 bps due to the inclusion of DenizBank and lower writebacks and recoveries.

The Group’s strong net profit of AED 12,483 million in the first nine months of 2019 is 63% above that posted in 2018. The results include a gain of AED 4,389 million on the partial disposal of Network International shares and a fair value measurement of the remaining stake. Core Operating Profit grew 5% y-o-y, supported by strong asset growth and higher fee income.

Loans and Deposits increased by 31% and 35% respectively since the beginning of the year. The Advances to Deposits Ratio remains comfortably within Management’s target range at 91.8%. In the first nine months of 2019, the Bank raised AED 12.7 billion of term funding through private placements with maturities out to 20 years.

RBWM delivered a strong performance in the first nine months of 2019 with total income of AED 5,936 million, up 9% y-o-y, led by growth in net interest income from liabilities, with revenue for the third quarter exceeding the AED 2 billion mark. Fee income increased by 5% compared to the previous year driven by Cards, Loans and FX, and comprised 33% of revenues.

Liabilities grew by 1% or AED 2 billion during 2019, backed by high-impact customer promotions and new product launches. Customer advances increased 2% during the year supported by strong acquisitions of personal and auto loans. New card sales were up 21% over the previous period supported by the new U By Emaar co-branded credit card, while total card spend was up 14%.

Priority Banking strengthened its franchise in 2019 along with relaunch of the bancassurance product range to offer increased value and enhanced protection to customers. Business Banking expanded its customer base by 6% y-o-y with increased trade finance revenues. Sourcing of new emerging affluent Personal Banking Beyond segment customers remained strong, achieving record acquisitions during the quarter.

The division continued to advance its digitization agenda with the roll out of a fully digital account opening process, enabling individual customers to open a new account instantly from their smartphones. Smart Pass was extended to all customers providing a secure and convenient way to authorize digital banking transactions using a soft token generated on the Bank’s Mobile Banking App without the need for SMS authentication. Dynamic currency conversion was enabled at all Emirates NBD ATMs for UAE visitors when making cash withdrawals using Visa cards.

The bank announced the creation of E20., a digital business bank for entrepreneurs and SMEs. Liv., the lifestyle digital bank for millennials continued to be the fastest growing retail proposition in the UAE, acquiring 34% more customers over the same quarter last year and reaching a base of over 300,000 customers.

Private Banking delivered strong growth on the back of increased client acquisitions supported by superior service delivery. The proposition was enhanced with the introduction of new funds and structured products while portfolio performance remained strong across all investor profiles. Emirates NBD Asset Management delivered a healthy growth of 17% in assets under management during 2019.

WB delivered a healthy set of results for the first nine months of 2019 with income up by 3% to AED 4,460 million compared to the corresponding period in 2018. Net profits were lower by 26%, mainly due to lower loan recoveries.

Net interest income of AED 3,438 million for the first nine months of 2019 was 1% higher than the corresponding period in 2018 mainly due to growth in lending activity partially offset by margin compression.

Fee income of AED 1,023 million for the first nine months of 2019 increased by 10% compared to the corresponding period in 2018 due to higher lending fee revenue and increased investment banking activity.

Costs were 9% higher for the same period mainly due to selective initiatives undertaken to reshape the business. As part of the Bank’s digitization program, Transaction Banking Services continues to invest in technology to enhance its product offering. In 2019, a number of new product offerings were launched including a new digital trade finance portal with best-in-class user experience.

In terms of the balance sheet, assets grew by 5% due to an increase in the Bank’s core and short term lending business. Deposits were 15% higher, with a continued focus on growing Current Account and Savings Account (CASA) balances, reflecting the Bank’s aim on lowering its average cost of funding while maintaining liquidity at an optimum level.

Trading revenue grew by 72% on increased credit trading activity from higher new issuance volumes in the region. The Rates and Foreign Exchange desks also contributed by taking advantage of volatility in their respective markets.

The Global Funding Desk raised AED 12.7 billion of term funding through private placements with maturities out to 20 years. The desk successfully raised a US$ 1 billion Perpetual Tier 1 earlier in 2019.

EI delivered a strong set of results for the first nine months of 2019 with a net profit of AED 937 million, up 43% compared to the same period last year, and exceeding 2018’s full year profit.

EI’s total assets reached AED 62.7 billion as at 30-Sep-2019. Financing and Investing Receivables increased by 3% to AED 37.4 billion since the start of the year. Customer accounts also increased by 9% to AED 45.2 billion over the same period. CASA balances represented 63% of total customer accounts. EI’s headline Financing to Deposit ratio stood at 83% and is comfortably within the management’s target range.

Emirates NBD acquired 99.85% shares in DenizBank on 31st July 2019 for a total consideration of USD 2.7 billion. DenizBank is the fifth largest private bank in Turkey with assets of AED 133 billion, loans of AED 90 billion and deposits of AED 93 billion as at 30 June 2019. DenizBank has a wide presence through a network of 2,800+ ATMs and operating with 708 branches in Turkey and 44 in other territories (Austria, Germany, Bahrain) servicing around 13 million customers, through 14,000+ employees.

The Bank’s Research team expects the UAE headline GDP growth to reach 2.0% in 2019, up from 1.7% in 2018 as the oil sector is expected to contribute positively to overall economic growth. Dubai is expected to be the main engine of non-oil growth in the UAE this year, with GDP forecast to expand 3.0% in 2019. Residential real estate prices and rents have continued to decline in 2019 as increased supply and reduced demand remain headwinds.

First of its kind partnership will transform financing for property rentals

Emirates Islamic, one of the leading Islamic financial institutions in the UAE, announced its financial results for the quarter ending 31 March, 2020. The Bank reported a net profit of AED 155 million for the first quarter of 2020.