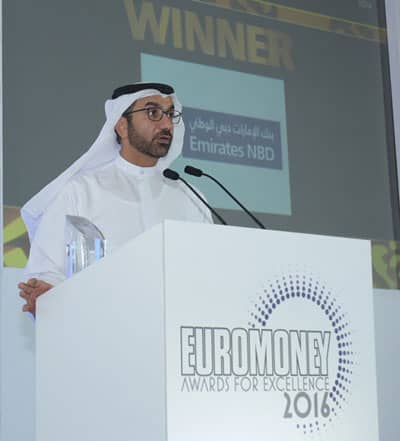 The bank was recognised for its solid financial and operational performance in the past year and in particular, for its continuous focus on product and service innovation to create a frictionless customer experience, further reinforcing Emirates NBD’s standing as the bank of choice for customers, employees and shareholders. The awards come close after Emirates NBD, one of the leading banking groups in the region, has announced that it will invest AED 500 million over the next three years towards digital innovation and multichannel transformation of its processes, products and services.

The prestigious award ceremony took place in Dubai and marked 25 years of the benchmark Euromoney global banking awards. The ceremony was attended by Hesham Abdulla Al Qassim, Vice Chairman and Managing Director of Emirates NBD as well as a group of senior executives and management members of the Bank in addition to a large number of senior bankers from the region.

Speaking after the ceremony, Hesham Abdulla Al Qassim, Vice Chairman and Managing Director of Emirates NBD said: “This significant recognition for Emirates NBD further validates our reputation as an innovation-led, customer-focused bank that is indisputably a market leader in the region. It is truly gratifying to be continuously awarded for our efforts which demonstrates our hard work to hone products, operations and service levels. Our efforts are in line with the vision of HH Sheikh Khalifa bin Zayed Al Nahyan, President of the UAE, and HH Sheikh Mohammed bin Rashid Al Maktoum, Vice President and Prime Minister of the UAE and Ruler of Dubai, and the directions of H.H. Sheikh Ahmed Bin Saeed Al Maktoum, Chairman of Emirates NBD, to make the UAE one of the world’s pioneering countries in supporting creativity.”

Emirates NBD is the largest banking group in the UAE by total income, net profit and branch network. A market leader in the UAE with a significant retail banking and wealth management business, the bank has emerged as a regional banking leader through an increased physical footprint, especially following its acquisition of BNP Paribas’
Egyptian unit, completed in 2013. The bank has also invested in digital initiatives to improve customer engagement and experience. As part of its multichannel transformation strategy, Emirates NBD has launched several new-to-market innovative banking services in the region, in line with Dubai’s vision of becoming a Smart City.